Usenet / Usenet tools / What is QuickPar and how does it work?

When downloading files through Usenet, you sometimes might encounter a par2 file. In some cases, the original files aren’t complete, but by using the par2 file and QuickPar you will be able to ‘save’ your file.

A par2 file contains information that can be used by software to check and recover an original file that you’ve downloaded through Usenet. Files downloaded or uploaded through Usenet might get corrupted or might be missing a few pieces. The par2 file will help you try to recover your original document. To be clear, a par2 file is no piece of software, movie or song, but simply a way to ‘fix’ other files.

However, a par2 file can’t fix anything without special activating software. This is where QuickPar comes in.

QuickPar is a free programme that can be used to open par2 files, so you can start recovering damaged files or documents. If you open a downloaded file with QuickPar, the software will automatically check if all files are complete. If not, QuickPar will try to start completing your files using the corresponding par2 file.

In order to use QuickPar, you will first need to install the programme. The software can be dowloaded for free on the website of QuickPar. The software only runs on Windows, Mac users can look for alternatives such as MacPAR deLuxe.

After downloading and installing the software, QuickPar will need to be configured. Via Options > Integration, you can choose which file types you want to use: par2, par1 and SFV. Here you need to select the par2 option. We recommend you to select the other two options as well, this gives you opportunity to recover even more files than with par2 alone. Also select the option ‘Integrate QuickPar in Shell’, so you can easily select files in Windows Explorer by using the right mouse button. If you will mainly be using for par2 file repair, you don’t need to worry about changing anything in the ‘Preferred Block Size’ section.

Finally, the ‘File Deletion’ option gives you the opportunity to automatically delete all damaged files and par2 files after they are done recovering the original files. The ‘Standard Priority’ section deserves some extra attention, as it indicates how much processing power needs to be given to QuickPar. The higher option you choose, the slower your computer will probably get.

If you want to get started with decent, general settings, you can configure your setting as depicted in the image below:

After configuring QuickPar, you can now start the software by clicking ‘OK’.

QuickPar has been installed and the first collection of files has been downloaded. But how can you ask QuickPar to start checking and recovering your damaged or incomplete files?

If you want to make full use of the software, you need to download the entire post – the incomplete files need to be downloaded as well. You can find instructions on this in the manual of the newsreader you’re using.

When your download is finished, double-click the par2 files to check the set. The software will automatically let you know which files are complete and which are incomplete in a separate window. Green marks a complete file, while red indicates an incomplete document. At the bottom, you can see how many blocks are needed to recover the set. A block is a piece of the downloaded file. Most Usenet users attach a set of par2 files to every uploaded file. If not, please ask the uploader to send you a few extra par2 files. You won’t need to specify which files are incomplete. Download the necessary blocks when they have been uploaded. 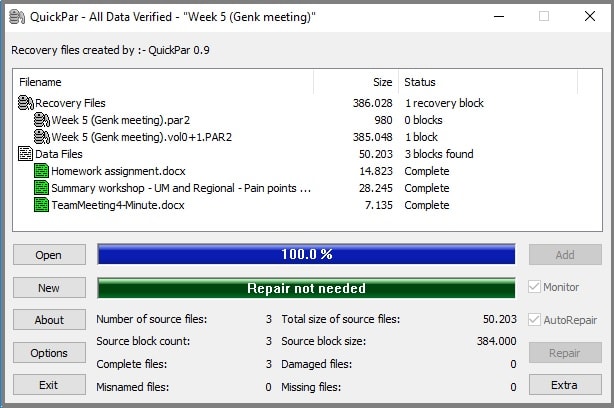 It’s important to only download the files necessary to recovering damaged documents. Most often, you only need to download a single par2 file in order to receive all necessary blocks. QuickPar will indicate how many blocks a certain file contains, by specifying this in the file name. From a file name such as ‘Freeware Collection Vol1+6’ can be derived that the current file consists of six blocks (+6), while the previous files consisted of one block (Vol1). Are you missing 12 blocks, for example, you will need to download the par2 file with a number bigger than 12 behind the + sign.

When you have downloaded all necessary blocks and files, QuickPar will start recovering all damaged files. When the software is finished, you can unpack them with WinRAR or a similar programme. Your files are now ready for use.

Creating your own par2 files

It’s also possible to create your own par2 files using QuickPar. Upon starting the software, you will have the option to ‘Add Files’. Add the file you want to turn into a par2 file. You can choose to only add one file or multiple ones at the same time.

Click ‘OK’ and return to the first window. You can see which files have been added. You will be able to change the settings now as well. These settings are set just right by default, but you will gain more options whenever you have added big files or multiple ones. We recommend you to ‘par’ 10% of your files. To do so, use the blue slider to set the ‘Redundancy‘ to 10%, meaning that 10% of the files may disappear or get corrupted, even if these are the par2 files themselves. The higher you set the ‘Redundancy’, the higher will be the ‘Recovery Data Size’. A higher recovery data size means more par2 files will be created, which is also more time consuming. 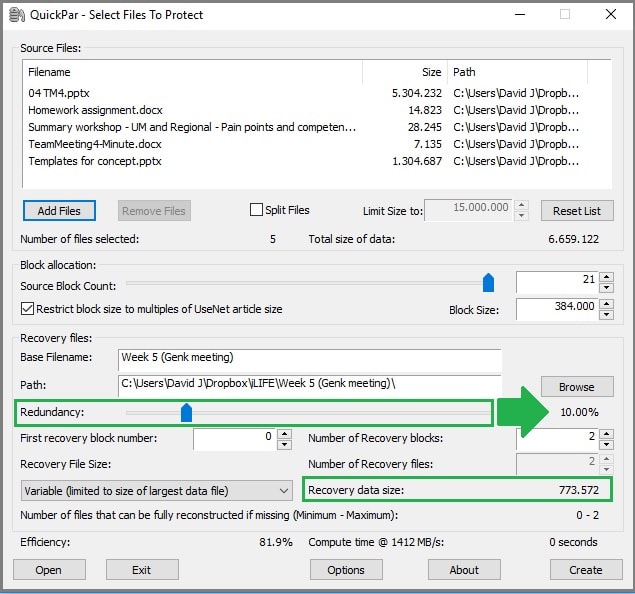 Click ‘Create’ and QuickPar will start creating your par2 files. This might take up to 15 minutes, depending on the number of selected files. When your files have been created, you can upload them to Usenet, along with the corresponding rar files.